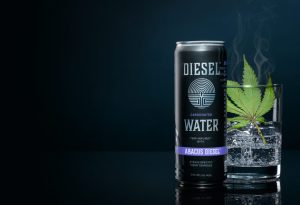 CBD is one of the cannabinoids in the cannabis plant. A wide range of new CBD-infused consumable products has reached the market in recent years. These popular products include chocolates, gummies, cookies, sauce, honey, olive oil, beverages, etc.

These products are promoted with a variety of therapeutic claims. Some claims are entirely unsubstantiated, but others have better support. For example, an anti-seizure medication currently on the market has gone through the entire FDA approval process.

Products are being promoted in the therapeutic space to help alleviate sleep disorders, chronic pain, and anxiety and promote general relaxation. There is a lot of ongoing research in this area that is seeking to better understand some of these therapeutic uses and properties.

Obtaining chemical information about these products is a core part of this research.

CBD is one of many components in cannabis. Other analytes include cannabinoids, terpenes, terpenoids and other compound classes.

Many researchers are looking to understand how these individual analytes impact physiological effects and how the analytes might interact and work together to impact these effects. These synergistic or entourage effects are thought to be essential factors in the products’ therapeutic properties.

For example, if terpenes are found to interact with CBD in specific ways in the plant,  terpenes and CBD will likely interact in the resulting products. Certain types or flavors of products could have different effects based on differences in terpene levels.

Beyond understanding the products’ chemical composition, it is also important to explore the benefits of extended analytical capabilities. Non-targeted analytical tools offer excellent potential for chemical analysis because analysts are often looking to undertake an exploratory analysis rather than looking at specific analytes.

A sampling of CBD-infused beverages can be achieved using Headspace solid-phase microextraction, while GC or GCxGC can be employed to separate the individual analytes. Time of flight mass spectrometry can be used to identify and quantify analytes present within the sample.

When using non-targeted tools, it is still possible to target specific analytes. For example, CBD can be analyzed as a standard and verified in samples, with retention matching between the standard and sample providing a means of comparing spectral data to an existing library.

Full mass range spectral data acquired via time of flight mass spectrometry is a valuable tool for non-target discovery work, supporting the analysis of specific analytes and providing a broader context and more general information on a sample.

This approach works by comparing the observed peaks to library databases, providing useful insight into the sample’s components.

This non-target analysis is not reliant on verifying the identifications with a standard. This information is taken together to identify peaks in the spectrum, with a combination of spectral similarity and retention index verification providing support for tentative identifications of components in the cannabis plant.

In some cases, what appears to be a single peak may contain more than one analyte. One of the benefits of time of flight mass spectrometry is that it can often uncover these coelutions. Software deconvolutes the coelutions automatically during data processing, returning pure spectral information for each analyte.

This capability provides additional information about samples, with many eluting analytes likely hiding each other without deconvolution.

Another dimension can be added to the analysis via chromatographic separation. GCxGC combines two columns with complimentary stationary phases. This means that a sample can be separated by both mechanisms in one analysis.

For example, the first column separates the results by color, and this is paired with a second column that separates by another complementary mechanism such as pattern.

GCxGC collects and re-injects information throughout the entire analysis, spreading the sample into two-dimensional space. Peaks that may overlap in the first dimension can often separate in the second, providing more information about the sample.

This method is also useful in a scenario where a 1D separation reveals analytes that overlap so much that deconvolution cannot be used to pull them apart.

This combination of deconvolution, time of flight and the added separation of GCxGC can help uncover hidden analytes in complex samples. Used together, these represent a powerful tool for non-targeted studies.

A recent CBD beverage characterization project instigated by LECO aimed to look at three different flavors: blackberry chai, pomegranate hibiscus and peach ginger. The project aimed to more generally characterize and compare the samples’ chemical profiles while focusing on some specific aspects of these samples.

The project was also highly focused on dosing in beverages, looking to measure and quantify CBD in the products to determine how much is present.

The team was interested in entourage effects, for example, whether terpenes in the samples could provide a better understanding of the interactions and effects of the product. Flavor properties were also investigated – particularly esters and other compounds that might impact the products’ aroma and flavors.

GCxGC mass spec data was collected for all samples. Information on over 380 analytes observed in the data was compiled. This was done non-targeted, but it was clear that CBD, terpenes, esters and other chemical compound components were present.

CBD was identified as a target in both the GC and GCxGC data, so it was important to have reliable identification information for this analyte in the samples. Retention was matched with the standard, with spectral information compared to the libraries.

Looking at trends in peak areas provided insight into the relative amounts of CBD in the samples. It was then possible to convert these peaks to quantitative concentrations (in ppm) via a calibration.

It was determined that CBD concentrations were in the 10 to 15 ppm range – a degree of variability that could affect dosing.

It was necessary to look deeper at trends in the analytes, with PCA providing a general overview of the similarities and differences. Scores were plotted, and each sample was presented as a data point. Replicates for a given flavor were observed to be similar, with observable differences between the different flavors.

Loadings provided insight into which variables or analytes were responsible for these differences. For example, limonene (a terpene) was higher in the blackberry chai sample, while an ester was higher in the peach ginger sample than the other flavors.

Some of the compound classes of interest provided useful data. Terpenes were of interest due to their synergistic effects, while esters were of interest for their flavor properties. These were observed to be notably different between the samples and flavors.

There was a significant difference in terpene content between the flavors, with the blackberry chai sample including higher amounts of monoterpenes, compared to the other two flavors. This was also the case for sesquiterpenes.

Ester trends also varied between the different flavors of beverages, with each flavor exhibiting its own unique ester profile. Exploring these profiles in more detail was possible by connecting the specific analytes observed to their associated aroma descriptors.

Throughout the example study, it became evident that this approach provided a great deal of useful information.

It was possible to generally characterize the samples using PCA, to develop a sense of overall similarities and differences. It was also possible to quantify CBD in these samples, determining dosing or concentration levels.

The study also highlighted that the blackberry chai sample had higher terpene levels compared to the other flavors, potentially providing information enabling the team to better understand or further investigate entourage effects. The team also began to uncover a range of flavor characteristics by looking at ester profiles.

The study demonstrated that analytical tools such as GCxGC and time of flight offer the potential to uncover significant information about a sample’s chemical profile. Deconvolution and a second dimension of separation provide specific benefits when looking to perform more targeted screening and non-targeted discovery work.